Highlights in the history of the Parkhotel Bellevue.

Trees are the emblem of the hotel. The imposing maples have stood here for three generations and over 100 years. The Bellevue Parkhotel & Spa, owned since 1926 by the Richard family, was built in 1901 as one of the first hotels in Adelboden. Following a fire in 1931 it was rebuilt in slick classical modern style.

Busy and turbulent early days were followed by years of constant construction and extension to make the holiday hotel what it is today. The complete history of the hotel can be divided into three chapters:

1901 | Fritz Allenbach, a teacher, has the Hotel Bellevue constructed out of wood, with side towers and oriels. At this time in Adelboden, quite a number of other hotels are also springing up. The hotel boom prompts teachers and farmers to try to make their fortunes - or at least to maintain a secure existence – by going into these new ventures in much the same way as the Gold Hunters have done in America. Whole families help to provide the capital required to finance the construction work. At the same time, Adelboden is undergoing a form of ‘colonisation’ by hoteliers from the inner Oberlands, which have already become popular with English tourists some fifty to seventy years earlier. Because these areas have already become saturated with hotels by the turn of century, attention now turns to the still undisturbed Engstligental. With the outbreak of the First World War, the blooming tourist industry suffers its first setback. Visitors stay away and hotel bookings fall considerably.

1919 | After the end of the war, the hotel is taken over by the Kantonalbank of Bern (now the Bernese Kantonalbank) and converted into what is for its day, a modern hotel. The en-suite bathtubs fulfil the highest standards of comfort. The hotel is run as a recuperation centre by Dr. G. Schaer as in-house doctor and Mr. A. Wenger as general director. From now on it is known as Parkhotel Bellevue.

1924 | At the end of winter, an avalanche descends from Schwandfeldspitz – there are no avalanche barricades at this time – into the valley, breaking down the wall of the hotel’s dining room. Waiters are there at the time, preparing the room for lunch. Fortunately, nobody is injured or worse. Even today, some of Adelboden’s older generation still speak about this spectacular occurrence.

1926 | Newlyweds Hans and Elisabeth Richard-Bohren buy the hotel. However, they find it problematic with the sanatorium, where Dr. Schaer cares for his sick patients. Hans, but especially Elisabeth - who comes from a family of Grindelwald hoteliers and herself grew up with her six brothers and sisters in the Grandhotel Regina – have a traditional hotel more in mind  This leads to a conflict of aims with Dr. Schaer, and finally the Richards part company with him.

In March the hotel is completely destroyed by fire. The exact cause is unclear to this day, but an electrical short-circuit is suspected. In the same year, the hotel is rebuilt in a modern style in stone by architects Urfer & Stähli from Interlaken. They have also been responsible for the modern swimming pool constructions in Interlaken and Wengen. The insurance payout is way too small to finance the building of the new hotel.

1935 | Hans Richard dies from tuberculosis aged 41. His widow continues to run the hotel alone for the time being. Shortly, she is joined by her brother Hans and later her widowed father- but he dies from a heart attack on New Years Eve 1937.

1943 | A key date in the hotel’s history is General Guisan’s visit together with his military commanders on the occasion of the Swiss army ski championships.

1944 | The government requisitions the hotel for military purposes and billets 30-40 American pilots as internees. «Normal guests» can no longer be accommodated. This action happens despite Swiss neutrality – for the internment of American pilots who have emergency-landed prevents further bombardment of Germany. The American flyers – all of them officers or NCOs – are not expected to be housed in an internment camp.  Indeed, the government permits them to be lodged together with a detachment of guards at the hotel. This means that the Americans can continue with their luxurious way of life, and they live like lords. Proof, if it is needed, is the unbeaten record for whisky sales at this time.

The Second World War and post-war years create the greatest difficulties in the history of the hotel. Even after peace has been declared, the guests stay away – the Swiss choosing to go abroad, and foreigners having insufficient money to travel to Switzerland. Recovery comes only in the mid 1950s, thanks largely to the introduction of paid holidays, which are becoming more and more common at all levels of society.

1958 The hotel is extended with a single-storey annexe on the south-west side. It houses a new dining room as well as a basement games room for adults with indoor curling and indoor golf.

1964 | The building work of 1964 is a milestone in the development of the hotel. At the rear, a modern, working kitchen with store and refrigeration is constructed. At the same time, the outlines for staff accommodation and private flats are set down. From 1964, both sons, Hans Rudolf and Beat, work for the family business.

1969 | After a few terms at ETH Zurich, Beat Richard carries out the extension of the Scotch Club, a dance club in the English style, with restaurant and bar, which he now runs. The reputation of this choice establishment soon extends beyond the cantonal borders as it becomes well-known for its live jazz, French bistro food and classic cuisine. The Scotch Club becomes a magnet for those enjoying a night out, with people coming from as far as Bern for an evening in Engstligental.

1970 | Elisabeth Richard dies from cancer. Hans Rudolf and Julia Richard take over the hotel management with Beat Richard responsible for the Scotch Club. A year later he leaves the family business to run the Gasthof Hirserenbad in Ursenbach, Emmental.

1970–1995 | The difficult years are finally over and the business goes from strength to strength due both to the economic upswing and to judicious business management. The husband and wife team pay great attention to the individual and personal care of their guests. Many of them show their loyalty by returning year after year. Continued expansion enables ever greater building investments to be made over the following 30 years: In 1972 construction of the swimming pool is carried out and in 1974 the hotel entrance, reception and halls are redesigned. Step by step the rooms are renovated. In the 1980s the trend towards individualism is further highlighted by the construction of the Garden Wing (1983) containing 20 completely differently designed rooms and family apartments. In 1991 the rooms in the main house are renovated and the number of rooms is reduced to create larger individual rooms. In 1995 the swimming pool is recreated and converted to a Wellness-Center «Aqua vitalis», with Roman-Irish thermals, sauna and whirlpools.

1995 | Andreas Richard takes over as Hotel Director, together with his mother, Julia, who remains in the business. Hans Rudolf Richard retires from the day-to-day operation on account of his age.

1999 |The winter storm «Lothar» ensures an adventurous end to the millennium, throwing the hotel back into the middle ages from 26-30 December. The storm, which sweeps mainly across France and Switzerland, causes a power blackout across the whole area on Boxing Day. For the following four days, there is no electricity or warm water, but a good spirit prevails throughout the week. The multi-course festive meals are cooked on the fireplace and with help from gas stoves, being served by candlelight. A number of guests are able to see the positive side of all these upheavals – as the guest book shows. Dr. Reifler and family from Grellingen/BL write: «No swimming pool, no sauna, no electric light, no television, no skiing. Unshaven men, and women with damp hair at breakfast. In its place, romantic dinners of the finest quality by candlelight, keep-fit on the staircases, sledging and discovering the snowy landscape on foot, playing cards with the children, reading a favourite book by torch lamp, interesting discussions with fellow guests over Glühwein around the fireplace. All these things we could experience thanks to the tremendous efforts of the Richard family and their staff.»

2000 | Due to heavy snowfall in February, the road between Adelboden and Frutigen is impassable and the area is cut off from civilisation for several days. With the increased risk of avalanches, the authorities – mindful of the «Belleview Avalanche» in 1924 – order the evacuation of hotel guests. This is despite the construction since then of a strong avalanche barrier, protecting the hotel from cascading snow. The entire Parkhotel is accommodated at the Hotel Regina for three days.

2001 | Large expansion of the Wellness-Center «pour». An open-air saltwater pool is constructed together with a spacious rest-pavilion in the garden. On the ground floor there are beauty and massage rooms as well as a fitness area. The hotel is now renamed Parkhotel Bellevue & Spa.

2003 | Reconstruction behind the scenes: renovation of entire kitchen, storerooms and part of the staff quarters. A new staff restaurant is built on the first floor and in the basement there’s a new air-conditioned wine cellar.

2006/08 | Reconstruction with the architects Buchner Bründler Basel: Renovation of the restaurant with bar and lounge and 22 rooms, suites and family suites.

2009 | Renovation of the swimming pool, saunas and steam baths with Buchner Bründler Basel.

2010 | Irene and Martin Müller take over the management of Parkhotel Bellevue. The hotel remains in the family.

2013 | Renovation of the lobby and the restaurant with Buchner Bründler Basel.

2015 | Renovation of all south facing rooms. Denise Mani and Daniel Schüpfer take over the management of Bellevue Parkhotel.

2018 | In August Franziska Richard, member of the owner family Richard, takes over the management of Bellevue Parkhotel. 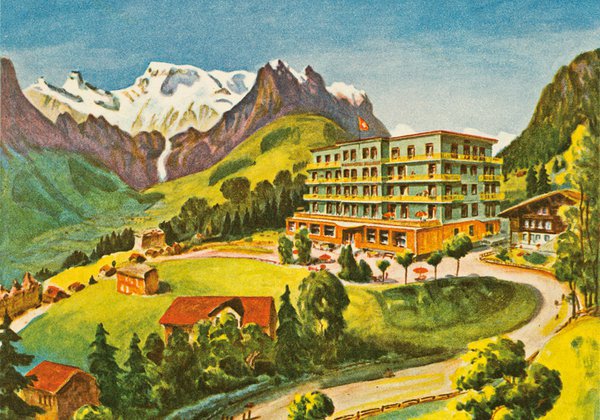